The Gender Pay Gap: A Look at Global Payment Inequality

How in our present-day evolved marketplaces, can there still be a widespread pay gap between genders? Men and women earn distinctly different salaries. Amidst an open atmosphere of encouraging diversity and balance within business, there is still pervasive, consistent inequality.

It comes down to a basic principle of fairness: men and women deserve and must have the same economic opportunities in life. However, all around the world, despite progress, protests, and ever-evolving legislation, there is a persistent variance between what men and women are paid and therefore valued at.

What Is The Gender Pay Gap?

The gender pay gap refers to the proportionate difference in remuneration received between male and female workers. Most often, it directly refers to the average annual remuneration of all female workers relative to the comparative pay of similarly placed male employees. It also refers to other metrics within the gender pay scale, such as fortnightly, weekly or even hourly earnings, as well as payment specific to a particular group of workers, or a particular skill set.

When one breaks things down to the actual numbers, startling findings arise. For each earned by a man, a woman is paid 74 cents on average. The World Economic Forum has determined that based on today’s rate of progress, it will take 99.5-years for this gap to close. As this chart of major OECD economies indicates, the pay gap discrepancy plays out all around the world.

I experienced the gender pay gap first hand. I fought really hard to climb the corporate ladder. I played by the rules. I worked after hours. By choice, I had no personal life whatsoever, and I got my MBA. With all the work put in and both my qualifications and mind in focus, I stepped into the business world doing everything that I thought necessary to earn the title and salary within the sector that I so eagerly desired. Sadly, it never happened.

Women are far too often taken for granted by management. They are micromanaged, judged, and scrutinized on every single thing they do thanks to an accepted attitude of being less capable. The bias, unfortunately, falls the other way when looking at a male employee. Competence and initiative are assumed automatically, whereas many female employees are left slaves to delegation, following orders with very little actual power and respect in the workplace.

How to Handle Payment Inequality

I was a single mom for 19-years – the head of my household, and living off one income. I wonder how many women out there experience the same thing, wondering what could be done about it?

It all starts with recognition. Women have to recognize and accept their equal place within the workplace, but at the same time, one cannot sugar-coat the current state of things. Being real about what is happening in terms of earnings and equality gives you a firm foundation of truth to begin assessing your possibilities and potential. Initiative is an empowered individual’s greatest asset. There are many opportunities lying just outside your comfort zone or area of familiarity. Parallel industries and supplemental skillets developed while working in today’s bustling business world create avenues for personal growth, “side-hustles,” second-jobs, working from home, and even starting your own business. Conventional enterprise opportunities may not be granted to a skilled, talented businesswoman, but they certainly can be seized.

Working Smart for A Better Tomorrow

Narrowing the pay gap comes down to working hard, and working smart. While it may not be fair, the dark age mentality that prevails also blinds many enterprises and businessmen from realizing the scope of competition around them. Successful female endeavors ranging from freelance services to titans of corporate industry dominate their verticals, turning aspects of femininity that were once leveraged and taken advantage of into uniquely powerful assets.

The Gap Is Diminishing

There is good news. The gap between the earnings of men and women is shrinking incrementally, and even though there is a disparity between the salary and wages of men & women, pay equity is coming into a global spotlight. Every company and female employee is encouraged to perform their own pay equity analysis of their organization, doing whatever is possible to balance the scales. Certain workers may find themselves limited in choices due to not wishing to jeopardize their current earnings, but at least the awareness of a problem creates an opportunity for you to act early and improve your career.

Did you know what there is a holiday for payment equality? Don’t forget that the last day of March is ‘Equal Pay Day’ – share knowledge concerning the problem and raise awareness concerning alternate revenue streams, opportunities, and steps to reduce the gender pay gap with all those that you know. It is going to take a global shift in thinking to bring about a balance in salaries, wages, and general remuneration for all. 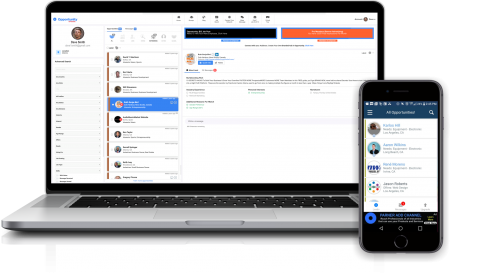 Our mobile app alerts you when Opportunities are nearby.

With you wherever you are!

Connect quickly with sales leads, hiring managers, job candidates and more. Manage all of your opportunities from anywhere in the world.

Enter your phone number to receive a download link directly to your phone.

We're taking the work out of networkingTM